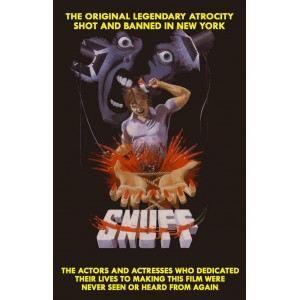 Very rare tape and sleeve both in good condition, playback is very good on this Black Box version, which was released privately after Astra withdrew this title from release on the Astra Label.

SNUFF the movie they said no producer could make, no distributor would release, and no audience could stomach. This is the one and only original legendary atrocity shot by Monarch Films in South America and New York, where human life is cheap! The mystery and controversy surrounding this vicious and violent venture remains clouded to this day. Many of the actors and actresses who dedicated their lives to making this film were never seen or heard from again.

SNUFF is the film that went too far an overwhelming assault on the senses that delves into a degree of delirium deeper than any ever achieved before.

SNUFF contains scenes of sadism, bondage, bloodshed and mutilation too real to be simulated, too shocking to be ignored!

Beautiful actresses, satanic slaves, bestial initiations, and grue- some gore beyond belief caused this picture to be banned. Are the killings in this film real? You be the judge!

One of the most infamous Exploitation films is actually a very different beast from the kind the hype would lead you to believe….

Around 1971 Mike and Roberta Findlay ("The Curse of her Flesh", "The Ultimate Degenerate") went to South America…where wages are cheap…to make a film based on the still fresh in the American mind 'Manson Murders'. The infamous crime where a number of well to do and or famous people (including Roman Polanski's pregnant Wife, Sharon Tate) were butchered by the rabid followers of Cult leader Charles Manson.

Titled "Slaughter", the film was a badly dubbed (mostly Argentinean actors were used), cheap and not so cheerful flick that secured a handful of South American play dates before drifting off down the river of slime that is the fate of scuzzy exploitation flicks that fail to click with the discerning fans of such things.

But it would live again.
Roughly 5 years later Producer Allan Shackleton picked the film up.
Shackleton was an infamous man to work with. A hard line, take the money and run, exploitation distributer. And he smelt money in the flop that was "Slaughter".
He removed the final minutes of "Slaughter" (The Findlay's denied any involvement in this, and Roberta especially never acknowledged the film that "Slaughter" became as their film any longer) and pasted on his own ending. Reportedly shot by a Horacio Fredriksson and Simon Nuchtern.
This new finale shows the 'real' film crew finishing the previous scene in "Slaughter", getting turned on by the violence, and deciding to really kill the actress for the camera!
That the actress replacing the one in the Findlay's actual movie, looks nothing at all like their actual actress seemed unimportant.
So we see the 'actress' tortured and eventually murdered…Just before the camera supposedly runs out of film……..

Thus was born one of the greatest marketing scams in the history of film.

'Snuff' films were an obscure urban legend. Shadowed rumours of unfortunates put in front of a camera and killed…For real! It was a fledgling term at the time, but Shackleton would catapult it into everyday life.
Releasing false reports to the Press that Police had 'discovered' a film from South America ("Where life is cheap", as Shakelton would famously say on his ad campaign for his film) that supposedly showed a woman being really murdered.
It was a move that also tapped in to the public 'fear' of those evil South American Dictatorships where masked men working for the Government would torture, rape and kill undesirables in dark cellars. Something that would become a mainstay during the 70's/80's ultimately giving birth to the highly underrated "8MM".
Anyway, The Press ate it up, and soon headlines about this 'snuff' film were screaming their free advertising around the good old U.S of A.

Now was the time for Shackleton to unleash his monster!!
"Slaughter" was now the aforementioned "Snuff".
With wonderfully exploitative ads and protesters (hired by Shackelton) standing outside some Cinemas showing the film, waving signs like 'Ban this filth' (you know, the old favourites), Shakleton soon found he had a winner on his hands.
As the Press caught on to the hype, and real misguided protesters started picketing the Grindhouse cinemas that were daring to show the movie 'where an actress is REALLY KILLED', "Snuff" was garnered with even more free publicity of the kind this type of film thrives on. And the rest is history…..

Very rare tape and sleeve both in good condition, playback is Very good!