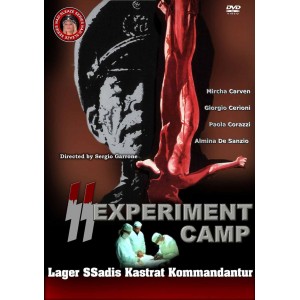 Some tasty females are sent to a Nazi experimental camp where some are shipped off to work in the local whorehouse and the more ‘select’ are chosen to be the sexual partners of Nazi super studs in some kind of experiment about something or other.

The camp Commandant (I mean, how camp does one have to be?) is a sadist who has flashbacks to the time he foolishly stopped shooting and got down to some raping and ended up half the man he used to be.
He blackmails a Jewish surgeon into carrying out extremely obscure and hazy operations on the women involving their ovaries. Now ovaries seem to have no link to missing testicles, but these many experiments on the unfortunate women are supposedly vital. I’m not a doctor, so what do I know! Meanwhile one of the inmates and one of the Nazi studs have fallen in love (aaaahhhh!) and soon all these crazy threads will come together to make a crazy quilt of Nazi nuttines.

But what of the film itself? You can understand the shock (and excitement) in the early 80’s when such content (that would never have got passed the BBFC for a cinema showing) was suddenly there to experience and the subject matter and setting still carry a very strong power to upset many even today.