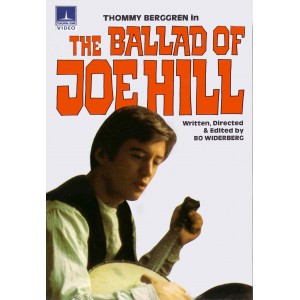 Revisionist Western from about an idealistic Swede who arrives in America in the start of the Twentieth Century. He attempts to rally the poor and organise labour by making speeches and singing songs, but is accused of murder on a trumped up charge and executed. There is some debate about whether this was based on a true story or not, and the glossy look of the film does not sit well with its earnest subject matter. Still, it is all well intentioned and nicely packaged, and the landscapes and Joan Baez' title song are undeniably beautiful.
Brilliant story about a swedish-american agitator Joe Hill. Thommy Berggrens acting, and the superb script of this Widerberg Classic! Widerberg has a certain way of making us interested in his stories. His storytelling is a little cold and has a documentary feel over them, However
This is one of his best ones! I'll finish off with Joe Hill's last words...