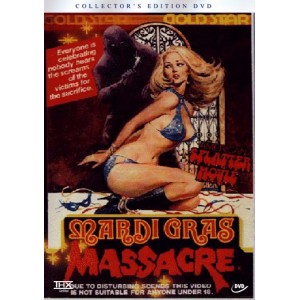 AKA - Crypt of Dark Secrets

This is a semi-remake of Blood Feast (1963) - the movie that broke the barrier in showing gore on screen. In this version of the same story, instead of an Egyptian character we have a deranged Aztec high priest as the main character. A serial killer in a welder's mask stalks the streets of New Orleans during the Mardi Gras festival. He is a strange intense-looking guy who shows up at a bar which is also home to the town's prostitutes. He tells the chicks that he wants the most evil woman in the bar. The head ho points him into the direction of a fat breasted brunette. She tells him, 'I could win first place in any evil contest', and away they go. The Aztec priest takes her back to his place and makes her strip. He then ties her to a table in his basement and begins doing some magical ritual with baby oil that makes her nipples rise. He then proceeds to torture her by amputating hands, then feet, then 'the part that you use for evil'. These are then sacrificed to Coatla, the Goddess of the Four Directions and Queen of Evil. The sacrifice involves removing the victim's heart, in one victim after the next until the final prostitute is despatched. After hearing of the crime, a police detective who sleeps with a whore and gets all the inside tips from her, becomes involved with trying to catch the murderer. One interesting gore scene is where one of his victims has her stomach split open and bloody organs pulled out from within