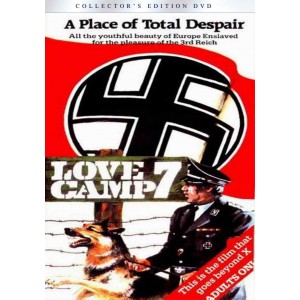 Cast: R.W. Cresse, Maria Lease, Kathy Wiliams, Bruce Kemp, John Aiderman, Rodger Steel, Rod Willmouth, Dave Friedman [David F. Friedman], John Riazzi, Louis Mazzarella, Larry Martinelli, Natasha Steel, Patricia Roddy, Carolyn Appelby, Ken Sims, Shelly Martin, Robert Baker
A Place of Total Despair. All the youthful beauty of Europe enslaved for the pleasure of the 3rd Reich. Two young WAC officers go undercover as POW's in the prison camp hoping to get some information from a scientist that's being held there, before being sprung out by the French resistance. Unfortunately things go wrong with the break out and they end up overstaying their welcome and being subjected to the same indignities as the other inmates.

The film was one of the original 74 video nasties in the UK and consequently banned. When the film was eventually submitted to the BBFC in 2002 it was refused a certificate with the statement as follows - 'The BBFC has refused a classification to the video of LOVE CAMP 7. LOVE CAMP 7 is an exploitation film set in a Nazi 'love camp' during the second World War. The film contains numerous scenes of women prisoners being abused, tortured and humiliated by their Nazi captors. Indeed the whole purpose of the work is to invite male viewers to relish the spectacle of naked women being humiliated for their titillation. LOVE CAMP 7 contains both eroticised depictions of sexual violence and repeated association of sex with restraint, pain, and humiliation. These sequences were in clear contravention of the Board's strict policy on depictions of sexual violence, which prohibits scenes that eroticise or endorse sexual assault. The possibility of cuts was considered. However, because the sexual violence runs throughout the work cutting was not considered to be a viable option'.