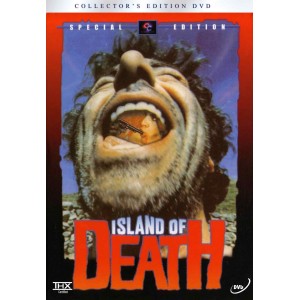 Plot
A couple (Christopher and Celia) arrive on a Greek island and rent a house before making love in a public phone box. Later that night they meet Jean-Claude, who is on the island to renovate a Chapel. The next morning Christopher wants sex, but Celia is too tired so Christopher shags a goat before killing it. The couple then kill Jean-Claude by drowning him in paint (after Celia has shagged him of course) and also a gay man (with a sword) and his lover (gun) and a detective (hanging from a plane). Christopher then visits an older woman and he urinates on her, beats her unconscious and decapitates her with a bulldozer. Celia is nearly raped by two men, who are summarily despatched also. Celia then meets a lesbian barmaid, and the couple kill her (after Celia has shagged her of course). Christopher attempts to rape his landlady before ‘accidentally’ killing her with a sickle. Chased by the police, Christopher and Celia run to the hills where they meet a shepherd who rapes them both before leaving Christopher to die in burning lime whilst shagging Celia (of course).

Review
The only Greek film on the DPP list, Island of Death was the brainchild of Nico Mastorakis, the second feature film from the TV Director / songwriter / quiz-show host. Mastorakis deliberately crammed the film with every perversion possible as we follow Christopher and Celia’s attempts to cleanse the island on a ‘crusade against perversion”, despite Christopher being the most corrupt person in the film. Along the way we are exposed to graphic sex, bestiality, masturbation, drug taking, rape, homosexuality, sodomy, mutilation, incest and urinating on old ladies. The murders are equally repellent, including a particularly nasty ‘face-burn-by-aerosol-can’ scene with the lesbian barmaid and the decapitation by bulldozer. Although crammed with nudity, depravity and some well-filmed location photography, the film is never great, but is often fun. The acting is sometimes dubious (the director makes a hilariously bad cameo as an ‘Agatha Christie’ type investigating novelist), and the Greek music, written by the director, is hugely enjoyable – “Get the sword! Kill them all!”

Versions
It was released theatrically in the UK in 1978 by Winstone Films under the title A Craving for Lust, but was cut by 18mins. The original video release was uncut, and a heavily edited version of the film was submitted under the title Psycho Killer 2 in 1987, but this was rejected. A version was passed in 2002 with 4mins 9secs of cuts (toning down the scenes of sexual assault) and was released by Vipco. This film is uncut on Greek and US DVDs.