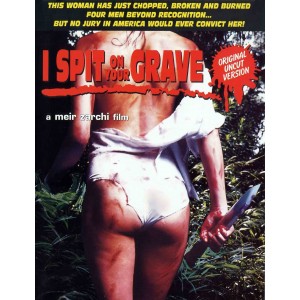 AKA - Day of the Woman; I Hate Your Guts

Plot
Novelist Jennifer Hill (Cammile Keaton – grand-niece of Buster) takes a vacation in a secluded summerhouse in the country. As she arrives, she is watched by Johnny the pump attendant and his friends Andy and Stanley. The next day she skinny-dips in the river, and takes a delivery of groceries from the local retard, Matthew. The four boys (including ‘innocent’ Matthew) then proceed to harass Jennifer and eventually Johnny rapes her. Matthew runs away, but the gang follow Jennifer and rape her again. She makes it back to the house, but the gang are waiting for her, and Matthew is coerced into raping her also, and the boys leave her for dead. Jennifer spends two weeks repairing herself and her torn-up manuscript, and when Matthew nervously shows up with a groceries delivery, she tempts him with sex before killing him. She then kills Johnny in the bath with a knife (ouch!) before finally despatching Andy and Stanley with an axe and a boat propeller.

Review
Arguably one of the most notorious and controversial of all the nasties, I Spit on Your Grave was condemned by almost all critics on its release (Kim Newman: “ISOYG has the distinction of being the most loathsome films of all time”) and this brutally shocking film is certainly no easy task to watch. Dealing with themes of rape and revenge, the film takes a distant (almost immoral) stance that neither condemns nor condones the rape or the subsequent murders. The rape scene itself is particularly uncomfortable (almost unwatchable), seemingly played out in real-time and shot largely from Jennifer’s point of view as she is gang-raped, not once, not twice, but three times on her struggle back to the house. The bath-time castration scene is equally gruesome, making men everywhere wince, although it has to be said the hanging of Matthew is almost comical. With very little music, lots of long shots and long-takes, and no really three-dimensional characters (apart from Jennifer) it is a very cold film, but also a very intense experience. It is this tone which has landed the film in the feminist art movie / filthy exploitation flick argument. Personally, if I had to pick, I’d go for the latter. Zarchi (who wrote, directed, edited and cast I Spit on Your Grave) went on to only make one other film, the little-seen Don’t Mess With My Sister!

Versions
The film was released in the UK on video only on Astra Video and Wizard Video (believed to be identical versions save for a small sticker on the tape). The version passed by the BBFC in 2002 was cut by 7m 02s, but this was later re-released in a more complete version the ‘reframed’ the rape scenes so they take place just off-camera. There were still 41s of cuts to remove the scene where Jennifer is raped over a rock.