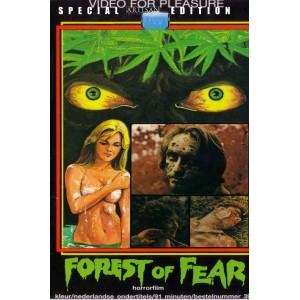 Plot
Two federal agents stumble upon a hippy community cultivating marijuana in a remote forest. They kill a young girl hippy, and are then stabbed to death by other members of hippy commune. In Washington, two other agents Briggs and Phillips discuss dropping a powerful herbicide, Dromax, over the area, even though it may have dangerous side effects. The drop is made and all but two of the hippies are covered in Dromax. Those covered in the pesticide turn into flesh eating zombies who chase and kill the two unaffected hippies, before murdering a man, a woman and a passing motorist. Tom, a forestry agent out with his brother Jay and his wife Polly, discover two children, Amy and Jimmy, left alone in the forest, but the cannibal hippies attack killing Jay. Tom, Polly and the children escape to a hermit’s shack, but the hippies attack (again), devouring the hermit as Tom, Polly and the children make their escape (again!). The next day Briggs and Phillips find them in the forest, but just as the two agents attempt to murder them, the killer hippies arrive. In the final showdown, all the crazed hippies are killed along with Polly, Briggs and Phillips, leaving only Tom, Jimmy and Amy alive.

Review
With the complete opening titles reading, “CM Productions presents Forest of Fear”, this film doesn’t hold out much hope from the get-go, and indeed is a sloppy, largely forgettable movie. Made by one-time filmmaker McCrann (one of the great unknowns in low-budget cinema), the most interesting thing about this film is that John Amplas (the lead in Romero’s Martin) plays Agent Phillips. All other characters in the film are dull or inappropriate, such as the two children who are seemingly played by actors in their mid-twenties (indeed the character of Jimmy just seems to mumble a few words to himself, largely ignored by the rest of the cast). The film lacks suspense, tension, shock and logic, and although the gore is reasonably well-performed, most of the killings take place off-screen.

Versions
The British release is missing the whole epilogue sequence (about 4 mins) where Tom quits his job and drives off to see how Amy and Jimmy are coping. It has never been resubmitted for classification, so is therefore still unavailable in the UK. An uncut Dutch video this version was released on ‘Video For Pleasure’ and in the US under the title Toxic Zombies, but both are currently out of print.