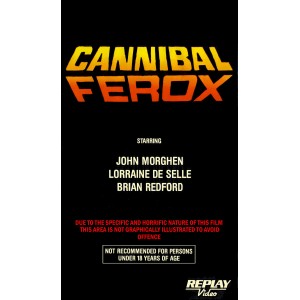 Mike rips off a drug gang to the tune of $100,00 and disappears from New York. Meanwhile, Patricia, Gloria and Rudy are in the Sth American jungle looking for cannibals (in an effort to disprove cannibalism exists). When their jeep gets stuck, they continue on foot, and happen across Mike and an injured Joe, screaming about cannibals, informing the group they were captured but then escaped. After a few incidental animal killings, the group find the village, but it is now deserted save for a few old men. Gloria wants to leave but Joe becomes more ill, so they decide to stay. Mike and Patricia have sex and Mike then kills a young native girl. Joe dies, but not before telling the group that Mike is psychotic. Mike does a runner with Pat, but the cannibals return, feasting on Joe’s body and capturing Mike and Pat. Rudy is killed, and Mike is castrated - his genitals eaten before his own eyes. He then has his hand chopped off, and the top of his head taken off with a machete. Pat is suspended by hooks through her breasts and killed. Gloria escapes, and three months later receives a Doctor’s Degree for her dissertation, Cannibalism: The End of a Myth.
Lenzi bombards us with real animal mutilations, limb hacking, eye gouging, castration and hooks through breasts.

Releases
In the UK, Replay released two versions in October 1982 – an uncut release with a ‘self-imposed XX’ certificate (This is the version on sale here), also one cut version (about 7 minutes was excised) with an unofficial BBFC 18 certificate. The cut version was eventually passed in 2000 on the Vipco label, with an extra 6 seconds removed for animal cruelty.