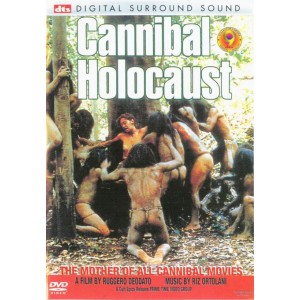 Plot
A search party is dispatched to the Sth American jungle to find a missing documentary film crew. Eventually, with the co-operation of the Yamamono tribe, they find the skeletal remains of the expedition and several undeveloped rolls of film. Back in New York, Professor Monroe is given the task of assembling the footage to create a documentary. From here on in, the focus of the film is the footage that was found (a la Blair Witch). We watch the footage of the crew (Alan, Faye, Jack and Mark) as they enter the jungle with guide, Felipe. They kill a turtle and eat it. Felipe is bitten by a snake and has his leg amputated, but he still dies. They come across the village of the Yacumo tribe and terrorise the village, burning the huts (and several of the tribe) to the ground – ‘for the sake of the documentary’. The men then capture and rape a young girl from the Yamamono tribe, before discovering a woman’s body impaled on a stake. Suddenly they find themselves surrounded by the Yamamono tribe who attack. A spear hits Jack and Alan shoots him dead. The tribe hack Jack’s body to pieces, feeding on his intestines. Faye is then captured, raped and bludgeoned to death. Alan and Mark are also killed on camera in the last frames of the footage. Back in New York, a shocked executive calls for the material to be destroyed.

Review
This is more like it! Cannibal Holocaust remains one of the most (if not THE most) powerful and expertly made films on the VRA list. With a fantastic score and an impressive film-within-a-film technique that utilises some remarkably ‘real’ hand-held footage CH grabs you by the throat from th outset and refuses to let go. Indeed, the film has consistently – and quite ridiculously – been labelled as a genuine snuff movie over the years, largely due to its unrelenting faux-documentary style that directly inspired The Blair Witch Project. Several prints exist around the world including the original UK release, trimmed by 6m 24s of excessive animal mutilations and sexual violence, which in fact makes it a far superior film than the original Director’s Cut. Deodato is still immensely proud of the film, calling it a “splendid film. I still can’t understand how I managed to direct it with such finesse and expertise”. If you only ever see one Cannibal film, make sure it’s this definitive movie – the ne plus ultra of the cannibal genre.
The original release first appeared in April 1982 and the full uncut version was submitted to the BBFC in 2001 by Vipco. It was eventually passed after 5m 44s of cuts, which removed all the animal cruelty and heavily toned down the rape scenes. The film is available on Japanese Laserdisc, uncut but optically censored. Cult Epics released an uncut laserdisc and video in Holland, and the Vipco and Cosa Nostra labels released uncut videos across Europe. EC Entertainment released an uncut DVD across Europe.