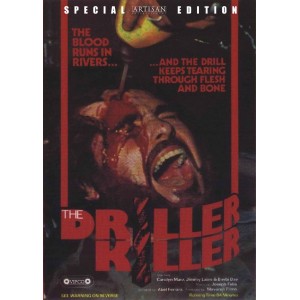 Plot
A struggling artist (Reno) is offended when he comes into contact with a tramp. The next day his flatmate (Pamela) drills a hole in the door with a power drill and Reno throws the telephone out of the window when a large bill arrives. Reno tries, but is unable to get any money for his paintings, and when a rock band moves in downstairs, it further annoys his concentration. He toys with a skinned rabbit corpse, before taking to the streets with a power drill to murder a street bum. The next day he kills a few more. His girlfriend (Carol) then leaves him when his painting is said to be ?shit? by his art dealer. Later, Reno kills the art dealer and Pamela his flat-mate. He visits Carol?s ex-husband?s place and murders him before lying in the bed, waiting for Carol to get out of the shower.

Review
Abel Ferrara pretty much launched his career with this film, taking the lead role (under the pseudonym Jimmie Laine) and directing this ?art-house? effort in 1979, yet it still remains more widely known for it?s lurid video artwork than the content of the film itself. Actually the film is a pretty good attempt at a blackly-humorous look at a man?s descent into depression, and is now regarded as an ?acceptable? nasty, largely thanks to Ferrara?s semi-assimilation into the mainstream (King of New York, Invasion of the Bodysnatchers and even some episodes of Miami Vice). The effects of the film are cleverly realised, but may detract from the film as a whole as they seem to alienate the art-house film fans, in the same way that the tone and the message of the film alienates the gore-hounds. But really, Driller Killer is very much an original ?punk? film, and whilst being relatively boring at times, it is still worth more of your time than most of the films on this list (yes, Devil Hunter and Don?t Go in the House.. that means you).

Versions
Driller Killer was originally released uncertified on the Vipco label in the UK before being banned in 1984. Visual Films resubmitted it in 1999, and it was passed 18 with minor cuts (54 secs) it also reinstated some non-violent scenes (42 secs) that were missing from the original print that had been trimmed in order to fit onto a 90 minute tape