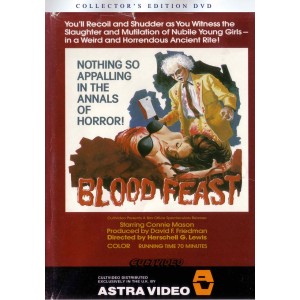 Plot
A knife-wielding maniac dismembers a girl in the bath and then takes her leg from the scene. The murderer is an Egyptian caterer, Fuad Ramses who is arranging to cook an ‘unusual’ ancient banquet for local woman Dorothy Fremont. At the back of Ramses’ shop is an altar to the Egyptian goddess, Ishtar. Ramses means to bring Ishtar back to life through a ceremonial (human) blood feast. Ramses then kills a girl on the beach and rips the tongue out of another girl’s mouth. Two Detectives stumble upon clues of Ishtar via a book club that a disfigured survivor belongs to. It turns out Ramses runs the book club, and it is how he selects his victims. He kills another victim and almost kills one of the Detectives (the last sacrifice needed) but they chase him into a garbage truck where he is ground to a pulp.

Review
Blood Feast is the oldest of the nasties. It was made in 1963 by Herschell Gordon Lewis (his first film) and has often been described as the first true gore film. It took one week to film, and it certainly looks like it as Blood Feast looks clumsy and semi-professional with bad sets and actors obviously reading lines. (Former Playboy model Connie Mason stars in one of the leading roles, but obviously wasn’t hired for her acting abilities). But that’s not really the point, as this film is purely about excessive graphic violence – a new concept in ’63. Amidst the carnage we are treated to a knife in the eye, the hacking off of a leg, and most famously the tongue removal where the killer holds a dripping sheep’s tongue, roots’n’all, above the red-sauced mouth of the victim. Audiences lapped it up, and it launched HG Lewis on a profitable cult career with such other films as 2000 Maniacs and The Gore Gore Girls, although Mr Lewis retired after this film to write books on mass-communication amongst other things.
Originally distributed in the UK on the Astra label, it was finally passed for UK video in 2001 after 23 seconds of BBFC cuts to remove a whipping scene.